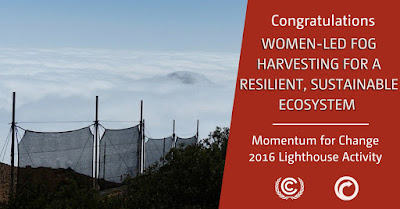 Thirteen game-changing initiatives from around the world were announced today as winners of the UNFCCC’s Momentum for Change climate change award.
Winning activities include:
Other winners include the EU’s largest crowdfunding platform for community solar projects and a project in Malaysia initiated by Ericsson that uses sensors to provide near real-time information to restore dwindling mangrove plantations.

Further winners are a company that provides solar systems to homes and businesses in rural Tanzania through an innovative financial package and a Swedish city that became the first in the world to issue green bonds, enabling it to borrow money for investments that benefit the environment.

The Momentum for Change initiative is spearheaded by the UN Climate Change secretariat to shine a light on some of the most innovative, scalable and replicable examples of what people are doing to address climate change. Today’s announcement is part of wider efforts to mobilize action and ambition as national governments work toward implementing the Paris Climate Change Agreement and the Sustainable Development Goals.

“The Momentum for Change Lighthouse Activities underline how climate action and sustainable development is building at all levels of society from country-wide initiatives to ones in communities, by companies and within cities world-wide,” UNFCCC Executive Secretary Patricia Espinosa said. “By showcasing these remarkable examples of creativity and transformational change, along with the extraordinary people behind them, we can inspire everyone to be an accelerator towards the kind of future we all want and need.”

Each of the 13 winning activities touches on one of Momentum for Change’s three focus areas: Women for Results, Financing for Climate Friendly Investment and ICT Solutions. All 13 will be showcased at a series of special events during the UN Climate Change Conference in Marrakech, Morocco (7 November to 18 November 2016).

The 2016 Lighthouse Activities were selected by an international advisory panel as part of the secretariat’s Momentum for Change initiative, which operates in partnership with the World Economic Forum Global Project on Climate Change and the Global e-Sustainability Initiative.