While I do not spend all of my time in Norwich, it continues to be my favourite English city...and it's fantastic to get back for various things.

This trip focused on the University of East Anglia's Water Security Research Centre, where I am a Visiting Fellow. I attended a seminar by Jamie Linton, a great mind in human-water interactions. He presented on the politics and social relations surrounding a dam in the Eastern Pyrenes of France. Fun stuff - and very different than what I usually do!

This afternoon, I got to know this year's cohort of postgraduate students a bit better through a three-hour seminar exploring the hydro spiral and how we understand models. I do believe a good time was had by all.


The Hydrosocial Spiral: Exploring Human-Water Interactions through Participatory Modelling
Abstract: “All models are wrong, but some are useful” (George E. P. Box). In 1934, the National Resources Board of the United States of America published the first visually descriptive hydrologic cycle diagram. Like water itself, this simple graphic has evolved in some ways and remained stagnant in others throughout the past eighty years. Multiple edits have been made, graphics have become more realistic, and many agencies and organisations have developed their own diagrams. Yet the majority of hydro cycle diagrams continue to ignore or understate the role of humans in the hydrologic system and the vast diversity of watersheds. For some time now, social scientists of water have been offering critiques of the ‘classic’ hydro cycle, with scholarship emerging around the ‘hydrosocial cycle’ and increased consideration of water’s interplay with other systems through the food-water-energy nexus, the planetary boundaries framework, and others. Building from these critiques and advances in our thinking on the teaching and modelling of water’s movement in the anthropocene, a Working Group at the University of East Anglia has created a participatory tool for exploring the historical, political, economic, cultural, and natural processes of water. The “hydrosocial spiral” is a dynamic visual graphic for use by researchers, teachers, managers, and activists allowing for a variety of conceptions of and communications around water. This seminar will review the extant literature on hydrosocial interactions, describe the creation and implementation of the hydrosocial spiral, and engage participants in creating their own version of a hydrosocial model. 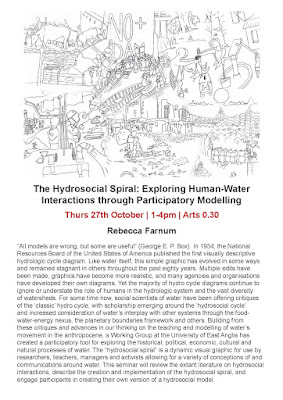