I have been incredibly spoiled for day trips as of late. Yesterday, the two Fulbright Teaching Assistants I'm living with decided to adventure to Taroudant. Why not join them?
Taroudant is nicknamed the "Grandmother of Marrakech", so named for its similar red sandstone walls and its status as a market town. It's very cute and far less touristy than many of the places I've been visiting thus far, which made for a nice change. I found some fantastic handmade leather flip-flops in the souk and we found some adorable residential streets to wander for a very different 'vibe' than in the more city-like Agadir.
One of the more fun aspects of our day was my first Grand Taxi experience. We got a 1.5 hour ride in a taxi for incredibly cheap...via the 'public transit' system in Morocco that squeezes at least seven people into 5-person cars. Quite the way to travel for long periods of time, especially at checkpoints when the authorities glance into your car and take no issue whatsoever with the number of folks crammed in and lack of seatbelts going on. 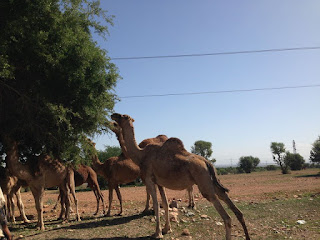 Sheep, donkeys, and goats grazing roadside are not an uncommon sight in Morocco. The large camel herd we found en route to Taroudant is a slightly rarer, but very much delightful, version. 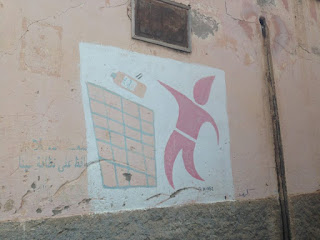 The fun of finding residential streets is that occasionally you stumble upon very cool public service announcement murals! We found a series of ones encouraging people to put rubbish in bins, to plant trees, and to exercise, among others. 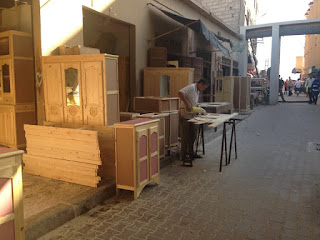 You can get anything at a souk. Anything. 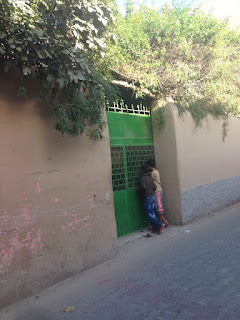 There was obviously some kind of football match happening yesterday afternoon; we sat down at one restaurant and didn't even manage to get served because the staff were so busy with match-watchers/watching themselves. We passed a couple of boys desperately peering through the cracks on this gate to see a cafe's television; later, we saw a huge crowd of teenage boys pouring out of the municipal stadium, where they'd clearly been screening whatever it was. 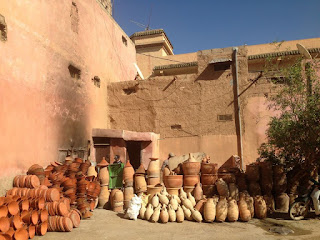 Pots. Lots and lots of pots. 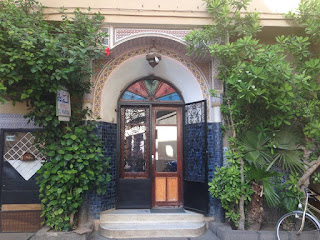 This country honestly has some amazingly beautiful doorways. I've got a whole series of photos like this because I can't seem to stop taking pictures of them. 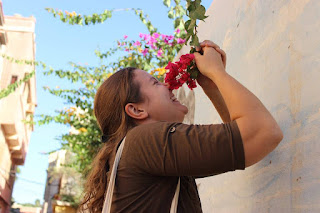 And one should always take time to stop and smell the flowers. Especially on beautifully sunny days in market towns, because there's something magical about quiet alleys and blue skies. :)