I've been teaching this week with King's College London's King's Scholars programme, a widening participation initiative working with pupils in Lambeth, Southwark and Westminster. King's Scholars explore what university is like through a variety of fun activities. #SpringUp17 was a weeklong 'day camp' for students in Year 8. They spent most of their time at King's with PhD students getting to know different subject streams at university. 90-minute 'taster sessions' gave them a feel for Dentistry, Geography, History & Politics, Languages & Literature, Law, Medicine, and Science.

The course I teach with The Brilliant Club, "Does the Telly Lie? Media and the Middle East", gets used in K+ Summer Spotlight. K+ is a similiar programme for older students, who choose one subject area and dive deeper instead of surveying all of them. For K+, "Does the Telly Lie?" is grouped into the Languages & Literature stream, so I was asked by the Widening Participation Team to create another Lang & Lit class for use in the Spring Up School.

What do you do?

Use Disney, of course!!

I thought a good bit about what it is that brings Languages and Literature together as an area of study, and decided on the idea of translation. Most obviously, we translate languages: Portuguese into Mandarin, Dutch into Arabic. But all of L&L is, in a way, about translating - transforming one form of communication into a context more easily understood and/or enjoyed by people. We translate Chaucer's Old English into its modern form. We translate archaic plays into fun new blockbuster films. We translate across cultures and time periods. We translate ideas and emotions into stories. You get the idea.

So we talked about famous alumni of King's College London who studied Languages & Literature, and what they did with their careers. (They include the lyricist Sir W. S. Gilbert of the famed Gilbert & Sullivan operas, renowned poet John Keats, bass guitarist John Deacon of Queen - who wrote 'Another One Bites the Dust', sci-fi 'godfather' Arthur C. Clarke, and modernist writer Virginia Woolfe.) We then talked about what translation is, and how many kinds of things we need to translate to understand each other and communication.

And then I gave them each a poem, a short French glossary, and two sentences' worth of grammar rules - and made them try to translate poetry. Shockingly, it didn't work well. "Is this masculine or feminine?" "You haven't given me the right verb tense!" "But miss, it doesn't RHYME!" "This has no rhythym."

After discussing the massive problems they were facing with direct translation ('plug-and-play words'), we took a look at a piece of multi-lingual poetry done very well. Ladies and gentlemen, I present: "Let It Go". (With apologies to the poor Year 8s whose little brothers and sisters watch this movie every. single. day.)


Groups then discussed why this worked so well when their attempts did not and debated whether Google Translate will ever be able to replace human interpreters. Presentations to the class got everyone up front - and for some of the students, this was the first time they'd ever spoken formally to a large group of people they didn't know. 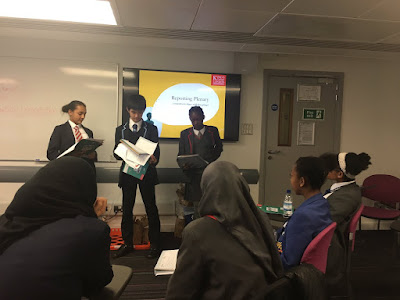 For our last activity, we turned again to Disney...this time having some fun with how badly relying solely on Google Translate can go.


Meanwhile next door, I had drafted my colleague Dan to teach the Geography stream. I wouldn't go so far as to say his session was COOLER than mine...though he did bring in far more toys! He had students evaluating the ecological status of different sites along the Thames based on real bugs in sampling trays. Indicator species of insects can tell us a lot about the general nutrient levels, average temperature, and overall health of an ecosystem. 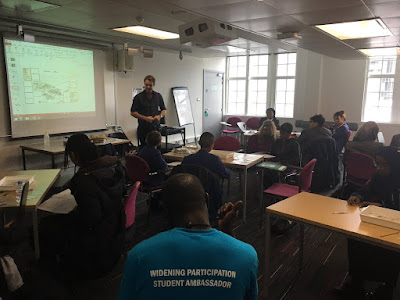 In other classes, the Year 8s considered the legality of 'stop and search' policies, questioned the factors that led to Donald Trump's election, examined the interdisciplinarity of science, and identified shark teeth. They've now been sent back to school with a quite massive task: deciding which of the streams was their favourite, and writing an essay about the topic they explored in that subject area. Good luck to all of them! 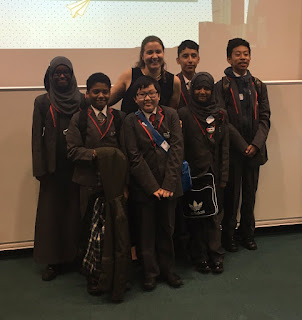 As a fun surprise, pupils were there from City Heights...a school where I've previously taught with The Brilliant Club! Some of my mentees from a course on mathematical astrophysics (asking whether the stars would be able to float in the bath) got quite confused as we suddenly debated translation theory instead of calculating density measurements. It was great to have a mini reunion with them.

Thanks so much to the King's Widening Participation Team, and great job to all the attendees of the Spring Up School - you were brilliant! Here's to making space at university for everyone who wants to come explore. :)