I've been a lot of places in the past ten days.

Oh, the fun I get to have every August and January with my new job at Syracuse, leading a travelling seminar on sustainability and environmental justice for 18 undergraduates.

From our course overview:

In the wake of the Cold War, environmental concerns took a new place on the global stage. The end of the 20th century saw the birth of formal international conservation and climate efforts, which most scholars trace to The Brundtland Commission’s Our Common Future report, released in 1987. Led by a former Norwegian Prime Minister, this body warned that humanity is pushing the finite carrying capacity of the planet to saturation. While such claims were not new, they were framed as increasingly urgent - and the international community began to respond. That report led the way to the Rio Declaration, the United Nations Framework Convention on Climate Change, and other major global mechanisms for emissions reduction and ecological conservation.

While shared environmental concern has led to unprecedented international cooperation around certain issues, much of the action seems to be ‘too little too late’. Climate change scientists are alerting us to the hottest temperatures on record, and we are losing vital ecosystems like the Arctic ice sheet at previously unanticipated rates.  Urban infrastructure, rural livelihoods, endangered species, habitats, and island nations are regularly devastated by extreme weather events, which are occurring with increasing frequency. And the effects of these droughts and disasters are far from equally felt. Those who contribute most to global warming through energy and other resource use feel its negative consequences the least. This reality raises serious questions about justice, equality, and power in climate change and human-environment systems.

This course is designed as a prequel that frames a semester abroad in the global city of London. Before starting a term of more traditional coursework at Faraday House, participants on the Signature Seminar will visit several Nordic countries, where the negative impacts of global environmental crises are felt most acutely in Europe. But it’s not all bad: This region is also home to some of the world’s greatest progress toward a form of sustainable development that “meets the needs of current generations without compromising the ability of future generations to meet their own needs” (The Bruntland Commission). This course examines the concepts of sustainability and environmental justice, using ethnographic practices of critical geography to explore how European countries are innovating and experimenting with alternative approaches to life, business, and society. These investigations aim to shift how we think about ourselves as humans, as animals, and as beings of Nature - independently and in relationship.

Students are guided through the established discourses and critiques of sustainability as an academic field. Three pillars, identified by Elkington (1994) and furthered in business and city planning as well as philosophy and environmental studies, will be used as core considerations: people, planet, and profit. This and other traditional conceptions of sustainability will be examined through the lens of various critical scholars and on-the-ground case studies. The course will recognise the progress that has been made and the political difficulties of additional action, even as it argues that the mostly negative (responsive, focusing on preventing, avoiding or solving human problems) efforts of these ‘exemplar’ countries fall short of what positive (proactive, working for the continued flourishing of all life on Earth) sustainability could and should be.

These challenges to and criticisms of sustainability as it is frequently understood (and, perhaps, given lip service and regarded as a buzzword more than anything else) will be complemented by an examination of environmental justice. Working from Schlosberg’s 2004 framework, students will explore the distribution of environmental benefits and costs, participation in decision-making around systems and policies, and the recognition of varied beliefs, values, and actors. Class discussions will question how these three dimensions are considered and addressed or ignored by the various initiatives visited in the field. Observing direct inequalities in access to air, land, food, water, oil and gas, and trees and forests will enable students to consider how environmental injustice has already led to the emergence and growth of protest movements and might inspire new responses. After exploring urbanscapes in several eco cities, the seminar’s final stop takes students to the Sápmi region, recognised as one of the area’s last wilderness spaces, for a chance to discover how climate change disproportionately affects the indigenous Sámi people.

Throughout the Signature Seminar, students will encounter multiple, sometimes contradictory, meanings of and approaches to sustainability and environmental justice - allowing them to consider whether these concepts have been reconstructed so often by different people and for various purposes that they no longer retain their original intentions. Viewing these ideas as essentially contested concepts - with meanings that can neither be discovered nor fixed - is useful in theory and practice, enabling an awareness of different stakeholders' priorities and assumptions. Ultimately, the Seminar aims to equip students in becoming positive agents, working as makers rather than victims of global change while supporting others to be the same. Doing so involves shifting priorities: moving from an anthropocentric (human-centred) value system toward an ecocentric (environment-centred) understanding of the world and an appreciation of the interconnectedness of life on Earth. This launches students’ development as global citizens at Syracuse London, where co-curricular programming will emphasise the responsibility we have as members of the world community to care for both people and planet.

The photos of me are minimal, as I was focused on teaching and taking shots of the students - and I can't post pictures of my students on my personal blog. But, here is a reindeer who apparently got into the hard hay or something (seriously, what a facial expression), as well as a super cute little one. And then, me loving on one of the huskies we took foraging for berries and mushrooms in the forested wilderness. Happy, happy Becca. 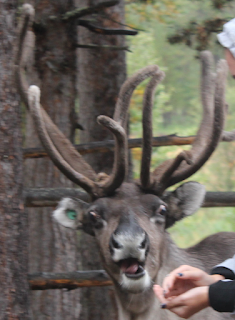 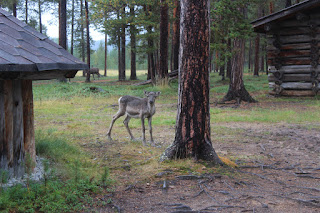 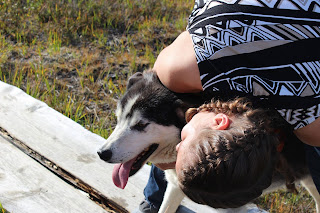 Posted by Becca Farnum at 5:02 PM No comments: