Time for another guest post from the Moroccan Environmental Youth Ambassadors! Happy International Day for the Preservation of the Ozone Layer.

Check out the original in French: http://darsihmadorg.blogspot.co.uk/2016/09/international-day-for-preservation-of.html

It is not by coincidence that the United Nations General Assembly has chosen September 16 for this day of action and raising awareness to the problems of the protection of the ozone layer. September 16 is the anniversary of the signing of the Montreal Protocol in 1987.

This year’s International Day for the Perseveration of the Ozone Layer is celebrated under the theme “Ozone Layer and Climate: Restored by a World United.” 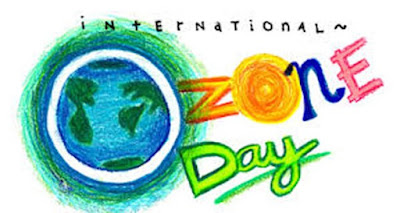 Industrial gases used in refrigerators and aerosols (a type of chlorofluorocarbon or hydrochlorofluorocarbons) are responsible for the depletion of the ozone layer - an atmospheric 'blanket' necessary for life on Earth that allows for the filtration of ultraviolet rays. To protect the ozone layer, the international community has set targets for the progressive elimination of these chemical substances. Between 1988 and 2010, the international community has reduced the emission of chlorofluorocarbons (CFC) by more than 80% under the Montreal Protocol. These efforts have allowed us to see an improvement in the state of the ozone layer, especially around the Antarctica. According to scientists, the hole currently there could return to its pre-1980 state after 2050.

The protection of the ozone layer also is linked to climate change, as the gas that destroys it is a strong greenhouse gas. Consequently, the important fight that has been undertaken against gas destructive to the ozone layer is also a beneficial action for the climate.

To fight against climate change, the COP (Conference of Parties) was created and set in place to frame the efforts of the participating countries. In November 2016, COP 22 will take place in Marrakech, Morocco. This  international reunion has already been announced as the “Conference of Action,” following the decisions taken by the previous edition of COP held in Paris.

One of the saddest realities of climate challenge is its unequal impact. Already marginalized groups bear the weight off the environmental degradation.

Acknowledging this fact, Dar Si Hmad has taken up the challenge of collecting potable fog water with its unique project in North Africa.

Some forty nets have been installed a an altitude of 1,225 meters at the peak of the Boutmezguida Mountain which overlooks five villages in the semi-arid region of Sidi Ifni. These nets capture droplets contained in the dense fog which surrounds the mountain. The drops are then treated, mixed with groundwater and transported via pipelines to the five villages below. This technique avoids a need for the inhabitants to journey several kilometers to get water.

In parallel with this project, Dar Si Hmad organizes the mobile Water School. The Water School was conceived with one main objective: to use the fog project as an entry to teaching through which children learn not only about water but also discover the natural world via scientific tools and see this world in a different way.

Dar Si Hmad, in partnership with the Regional Delegation of Education in Sidi Ifni, organizes activities and diverse courses in the rural schools of Aït Baamrane. The students learn to understand many aspects related to the theme of water, as well as the interdependence of ecosystems. The adopted approach aims to engage the students entirely: spirits, hearts and bodies.

Lastly, but certainly not least, the environmental program directed by ambitious youth, under the auspices of Dar Si Hmad, Environmental Youth Ambassadors (EYAs). Until now, the EYAs have contributed to the 2016 Water School, organized two community events with more than 60 young participants, and held events to raise awareness through visual narration and environmental journalism to advocate about environmental matters in southwest Morocco at a local and international scale that have not received attention or substantial publicity. Especially as the COP 22 Conference held in Marrakech in November 2016 approaches, this type of initiative will be a significant contribution to the dialogues and commitments of COP 22, showcasing the dynamic efforts of young Moroccans who raise awareness in the fight against climate change.

The protective ozone barrier makes live on our planet possible. It contributes in a large way to the fight against climate change. From the importance of this day of action and awareness which is an opportunity to exchange our experiences and results, let us take this opportunity to make people more conscious of this responsibility!