This week has been rather incredible. Ten months ago, I began dreaming about having all three of my research partners from Morocco, Kuwait, and Lebanon show up in London at the same time to speak on a conference panel about environmental peacebuilding. This week, it happened at the Royal Geographical Society with IBG's Annual Conference. 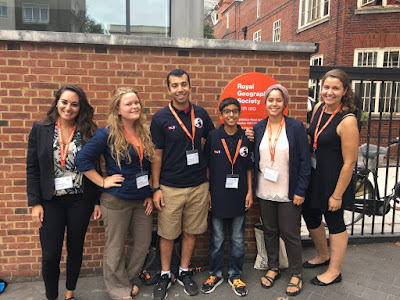 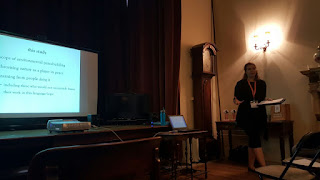 While scarce natural resources can be a catalyst for animosity and violence, they also provide common ground for creative solutions. This paper explores the utility of the natural environment as a landscape for innovation, collaboration, and development, deconstructing the myriad ways the environment participates in human relations. It seeks to expand environmental peacebuilding narratives and policy recommendations beyond the narrow framework of conflict, to include poverty, marginalization, xenophobia, and inequality, conditions likewise intimately connected to how natural resources are managed and distributed. Highlighting the case of an Ethnographic Field School in rural Southwest Morocco, the paper reflects on the central role the environment has played in facilitating intercultural exchange, fueling collaborative innovation, and promoting equitable development. The school, run by local NGO Dar Si Hmad, was established in 2010 to support their participatory fog-harvesting initiative, which uses advanced technology to collect water from fog and pipe it to rural villages previously without access to potable water. Through the Field School, international students, researchers, and 'experts' visit the region, adding value to the fog-harvesting project by contributing funding and international visibility as well as new skills and technology. Simultaneously, beneficiary villagers and the bled (countryside) itself offer visitors field experience, cutting-edge research opportunities, and invaluable cross-cultural understanding. Though inequalities are not wiped away by participation in the initiative, the project's physical location lends some balance to power relations, radically altering the distribution of social capital among stakeholders. Environmental peacebuilding has proven salient here, despite the absence of conflict, as cultural education and collaborative natural resource management continue to lay the groundwork for durable peace, intercultural understanding, and symbiotic growth. 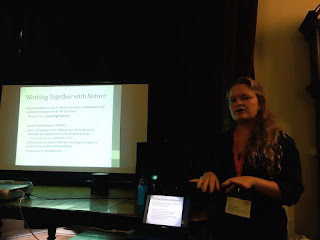 Thirty years ago, a group of young Kuwaiti friends began using their love for scuba diving to help protect the Gulf's marine environment. After the 1990-1991 Iraqi invasion of Kuwait and subsequent Gulf War, their work became post-conflict rebuilding and restoration.
25 years later, the Kuwait Dive Team has become one of Kuwait's major environmental volunteering organisations. And their work, like the environment they work with, has moved beyond their country's borders. To share successful examples of environmental voluntary organizations around the globe and build a network of collaboration, the Kuwait Dive Team launched the Global Environmental Guardians Network (GEGN) in the United States with a vision to foster collaboration and cooperation between environmental organizations and teams that carry out serious eco-missions targeting challenging environmental issues. More locally, the Team has organized multiple forums for organizations in the Middle East region with the aims to create a roadmap and brainstorm solutions with other like-minded organisations for tough environmental issues around the globe. During this presentation, members of the Kuwait Dive Team will share the Team's work, mission, and projects that impact environmental peacebuilding, as well as their motivations for engaging in international relations around the environment and the lessons they have learned from their 'diving diplomacy'. 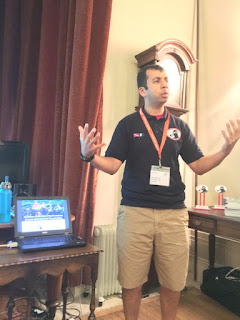 The Media Association for Peace (MAP) is a non-partisan, non-governmental, youth-led organisation in Lebanon. The organisation is dedicated to furthering the role of media and journalism in peace, conflict, and social change, building from the concept of peace journalism, "when editors and reporters make choices – of what stories to report, and how to report them – that create opportunities for society at large to consider and value non-violent responses to conflict" (Lynch & McGoldrick 2005). This paper presents the results of MAP's pilot project on "Media, Peace and Environment". The project aims to reach positive peace by addressing the indirect violence found in societal structures, particularly as they play out in and with the natural environment. Through a series of trainings, public discussions, and international conferences, the pilot programme has furthered theoretical and activist perspectives on the concept of 'environmental peacebuilding'. Building academic literature in Arabic about environmental peacebuilding has opened the evolving discourse to new input and made the topic more accessible. MAP's efforts in training media students, young media professionals, and journalists on the theory and practice of peace journalism through constructive conflict coverage and solutions-oriented reporting on human rights, development, and environmental issues will be evaluated and presented as a case study to inform further work in environmental peacebuilding in Lebanon and beyond. 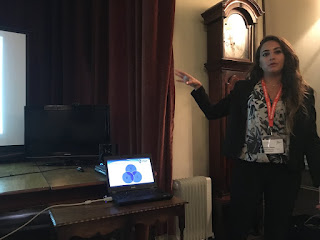 I was definitely sniffling a little as I saw all three of them on a panel together: 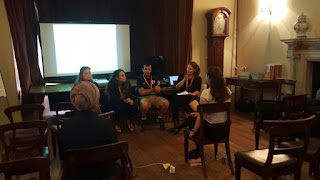 I was able to support many of the groups with at least partial flight expenses and a waiving of their conference fees, thanks to some RGS Research Groups and King's College London mini-grants.
Dar Si Hmad from Morocco was also represented on a session around water, gender, and violence, with Souad sharing the work they're doing with women's empowerment surrounding the fog project. 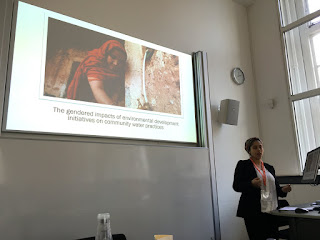 And then DSH's Water School and the Kuwait Dive Team's Beach Clean-Up were highlighted as positive case studies for environmental education. 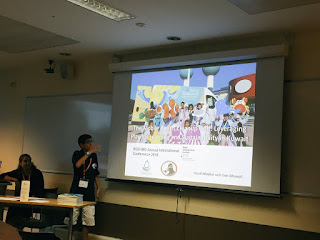 All in all, a rather fantastic week. We're now having fun touring around London together - with a few special guests in the form of young children. ;) 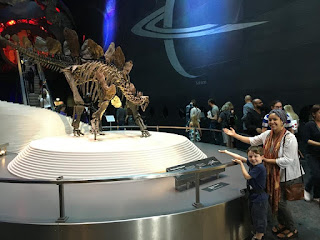