I am thoroughly confused by the number of hellos and goodbyes going on in my life these days.

I "moved" to London on 1 September but don't get into my flat till the 23rd. So I've been staying with mates in London and with Iorwerth and family in Norwich.
The day I got into London, my cousin just happened to be in town for an interview. She lives in New York but has spent the summer traveling Southeast Asia. It's been years since we've seen each other properly. Just we had a nice catch-up, and then learned that she in fact got the job and is moving to London in a month. To celebrate, we quickly got on a train to Norwich, where she got much cheaper lodging before her new job puts her up for a workshop next week. And proceeding to have a grand time playing with the kiddo. Iorwerth was quite enamoured with Miss Elizabeth's scooter skills. 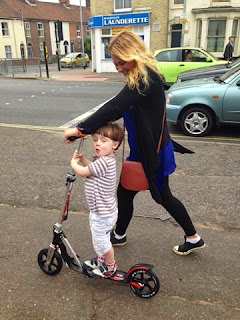 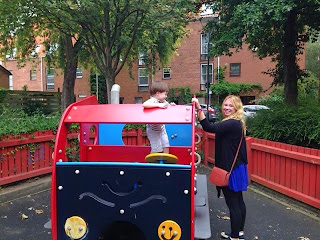 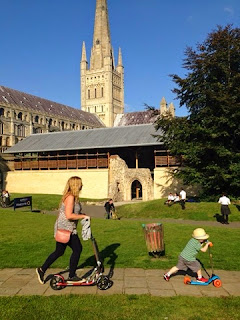 Then it was up before 5am this morning for an early train to London in order to spend as much time as possible with Garrett in the 36 hours between turning in his dissertation and getting on a plane to go back to America permanently. I'll also be saying goodbye to Elizabeth, though this one is only a very temporary adieu.
Meanwhile, prep continues for the massive round of hellos to the new Marshall Scholars, arriving the 16th.
Someday in the not-quite-foreseeable future, I am going to have a moderately stable social group again...