A quick post to say 'hello' and say that I've made it safely and well! My research host was hosting her in-laws this week, and today is Eid Al Massira Al Khadra, or the Green March, a public holiday in Morocco commemorating the strategic mass demonstration that was held in November 1975 (organised by the government) to win the Spanish Sahara from Spain. Given the shorter work week (Morocco works Monday-Friday, unlike many majority Muslim countries I'm familiar with) and her busyness, she suggested I take a few days to acclimate. 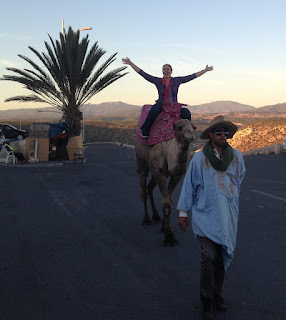 One of the AMENDS Fellows, who originally put me in contact with Dar Si Hmad to do this work, met me the day after I arrived and took me around his city. One of our first stops was the massive outdoor market, Souk El Had (literally, the Sunday Market - so named because it is open on Sunday and instead closes on Monday as the rest day). Abdelkrim claims it's the largest in Africa. I can't vouch for that, but I can say it was quite huge. You can buy virtually everything, from Dora the Explorer backpacks to local fruit. I've been in many a souk before, but this was the first time I saw full rows and rows of chicken and rabbit vendors. A fascinating sight, including all the butchering equipment, albeit not one for weak stomachs - and one that made the animal rights advocate in me squirm a bit, captivating though it all was. 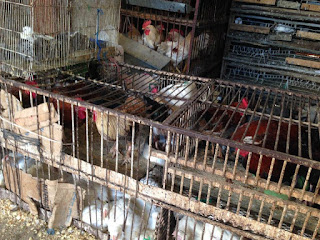 Much less controversially, we  then off to the mountains, with a beautiful view of the port and the sunset: 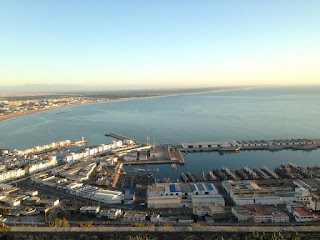 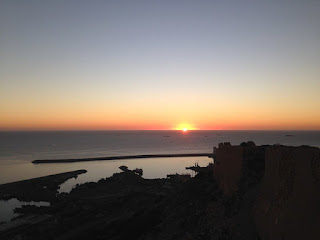 After the sun set, we walked along the beach promenade and I gloried in all the palm trees and evening lights of Agadir. Just as we were getting back to the car, the universe graced me with this lark: 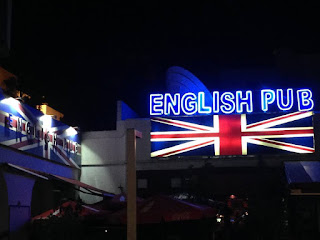 I did not, in fact, go in. Yet. ;) My cousin is coming to visit at the end of my stay in mid-December, and somehow I have the feeling we'll just happen to find ourselves there. Abdelkrim says the soda inside is more expensive than the beer - a true English pub, that!

I stayed in a hotel for the first few days, while my host's house was taken over by visiting family. I'm now preparing to move in there, at which time I'll stop dilly-dallying about with camels and actually get to work. Maybe. ;)
Posted by Becca Farnum at 11:06 AM