The 2015 United Nations Climate Change Conference is kicking off in Paris today.

On Sunday 29 November, groups all over the world mobilised for the People's Climate March, raising their voices together against climate change. I marched in Agadir with some friends from Dar Si Hmad and the Surfrider Foundation. 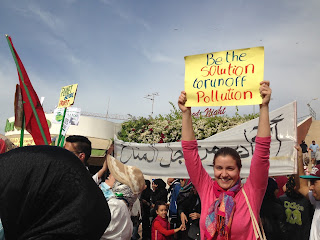 I also wrote a brief piece about the connections between climate change and gender-based violence for Dar Si Hmad's 16 Days Campaign: http://darsihmadorg.blogspot.com/2015/11/the-peoples-climate-march-and-violence.html.

Meanwhile in the UK, the team of Low Carbon Mentors I help lead worked with a high school in Norwich to write a statement against climate change. The students presented their statement to local MP Chloe Smith and sent to it 10 Downing Street, MP Clive Lewis, the Bishop of East Anglia, and Paris.

The English high schoolers call for a world "where racism, world hunger and poverty are extinct instead of animals". Read their powerful statement here: https://brightfuturesnorfolk.wordpress.com/2015/11/30/norfolk-students-write-statement-on-climate-change/.