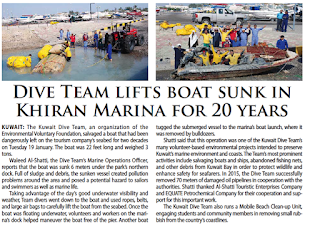 I had the most bizarre boat ride of my life on Tuesday. I was in the Khiran Resort Marina in south Kuwait, and I cruised along through the beautiful clear blue waters standing on a boat.
The trick is that the boat was upside down. And under the water.

The thing had been on the seabed for 20 years, 6 metres down and barely visible beneath the water. The amount of regular activity around the dock, issues of visibility, and the skill (and expense) required to lift a sunken boat meant the thing had years and years to settle in and cause pollution issues and potential hazards.
But on Tuesday, up she came. And I "helped"...in much the same way Iorwerth assists me in baking. Waleed was kind enough to give me simple jobs that would have taken him 20 seconds and managed to require five minutes of our joint effort as he explained what to do. 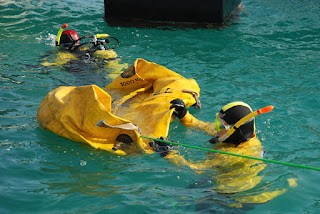 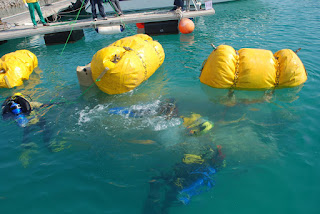 The divers are all volunteers, and the Team isn't contracted or paid for any of their operations, though they do something receive support in the form of free equipment loans. And while 3 hours in the sea is generally fun, it's also exhausting, dangerous, and demanding work. I understand why they do it, though. The feeling of being underwater, watching a boat slowly begin to rise from the sand as giant air bags carefully tied around it heft it upward, is nigh on undescribable. And having it all the way out of the water after 2 hours of trial and error, communicating underwater with specialised sign language, tying and retying ropes, and testing various angles of boat and crane pull, was a definite high. 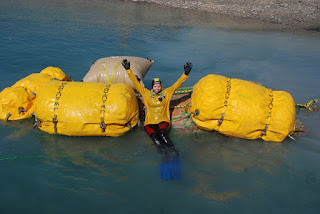 And now I better understand why the Team is so intent on forging relationships with other organisations around the world - this stuff is serious, and niche. They have incredibly specialised skillsets, and sharing their particular approaches while hearing others' is a way to be better at this. It's not the kind of thing one can major in at university or learn at your average vocational school...

I was privileged to get a small insight into how these kinds of operations work. I teased Waleed that maybe someday I'll be able to lead a salvage myself. But given that the Team has spent 3 decades honing these operations, 'someday' may be far distant indeed. ;) 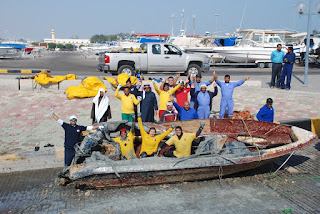