Currently in town are a few of Anne-Marie's cousins, one of whom tries to come every year and a half or so. She is also the benefactress of Iorwerth's most delightful Spider-Man pyjamas. So naturally we modelled them after dinner on Monday. And feeling British, he apparently also needed to have his dressing gown on. 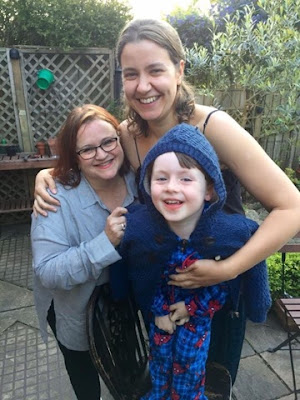 And now I am en route to Heathrow to find Kate, a friend from the Battle Creek Mathematics and Science Center and a fellow Mackinac Island Honor Scout. She's touring about for a week or so. Monday and Tuesday are "Nerd Fest" - we shall be touring the Doctor Who Experience in Cardiff and then visiting the Warner Brothers Harry Potter Studios in London.