I gave Sarah a whopping 36 hours in England before I got her back on a plane. (To be fair, she made the most of it, nipping off to the Harry Potter Warner Brothers Studio Tour and getting the chance to tour Hogwarts in the snow during their 'Fire and Ice' show!)
But off we popped to Barcelona for a few days of warmer weather...and the hilariously fun thing that is Catalonia at Christmas.

Let's talk about a caganer. The caganer in a Nativity scene is shown...umm...defecating. Actively. In the corner of the natavity. The name literally means the 'crapper' (and I'm censoring for language...feel free to imagine a more colourful word for that idea, which is the properly literal translation). A peasant wearing a red barretina and smoking a pipe has his trousers down, his bare backside up in the air, and a pile of poo below him. In modern interpretations, political and social commentary leads artists to include various public figures and ideas. 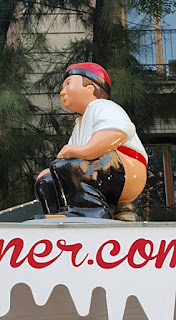 I truly am not sure what to say. Other than that the sheer diversity of figurines they have now made for tourists...including the Queen, Hello Kitty, and C3PO, is worth at least an hour of entertainment.

And it doesn't even stop there! The poop lives on! Each household's Tió de Nadal is a magical (again, I censor) pooping log. The log is 'fed' for the weeks leading up to Christmas and then is told to...erm...empty its...bowels? (Do logs have bowels?!) It poops out candy for the children. 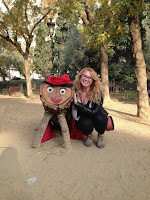 Effy found no end of amusement from these cultural customs. Especially when she found the song. Here, I am not going to censor. It simply does not have the same ring when I do. So here you are:


There are some more familiar sights as well. 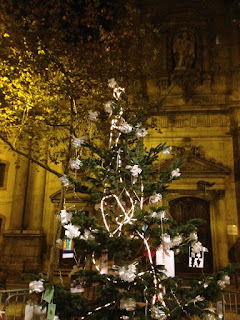 But even their holiday lights remind you of the fact that you are in Spain. One must not forget Picasso! 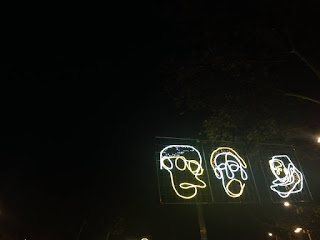 Since you're also on the beach...so Christmas sangria? Naturally! 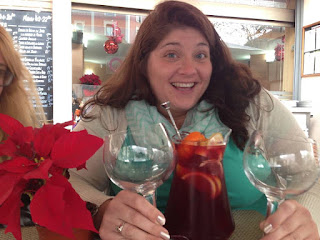 And that, my friend...is Christmas in Catalonia.

We did, in fact, do some things other than contemplate festive fecal matter.

We saw la Sagrada Famíia, a Roman Catholic church designed by Antonio Gaudi that honestly has elements reminding me of a fairy princess castle: 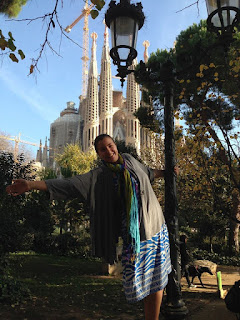 I much prefer his Park Güell, which is really quite magical: 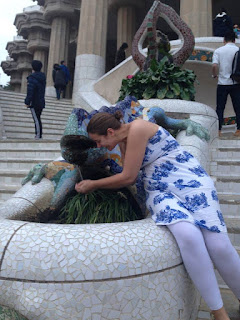 Barcelona's own Arc de Triomf, a much redder and slightly smaller but still absolutely gorgeous arch, was also a favourite: 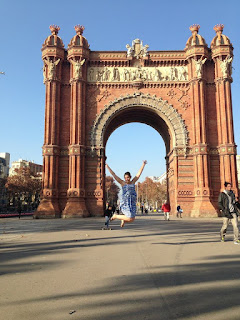 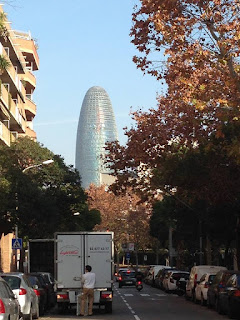 Finally, the whimsical delights of bubbles from street performers never fail to bring a smile. 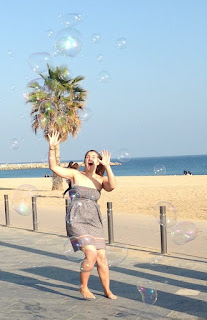 Today's life lesson from Becca:
Jump for joy.
Reach for beauty.
Celebrate the temporary.
Let your feet leave the ground.
In the air, in the moment, in the splendour, in the exuberance...there you are truly living.
Posted by Becca Farnum at 8:40 AM