You may recall that I shared a story about Maya Terro's efforts against hunger in Lebanon after the spat of attacks around the world in November.

One of the grand things about being based physically in Beirut is that I am now able to actually see Maya's work with FoodBlessed for myself. Maya and her team of 'Hunger Heroes' have served nearly a quarter of a million meals, helping hundreds of thousands of people - many of whom are refugees from the Syrian and Palestinian conflicts.

Yesterday, Maya held a potluck in the northern mountains for her volunteers. I was (very willingly) dragged along, where I proceeded to arrange greenery, fry potatoes, and pick up rubbish in between meeting the very cool and incredibly diverse lot of Hunger Heroes. 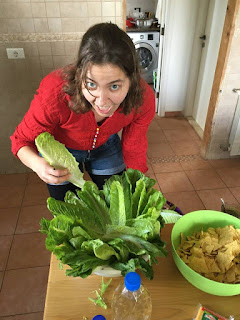 In many ways, it was the kind of barbecue you'd see in America on any nice weekend. We had a grillmaster (Maya's sister's fiancé, who very kindly gave me a ride up - thanks, Abbas!): 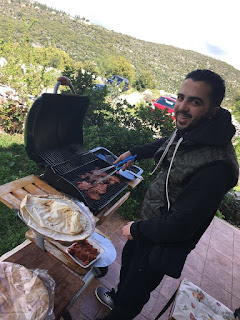 And the table was filled with condiments and crisps and 7-layer dip: 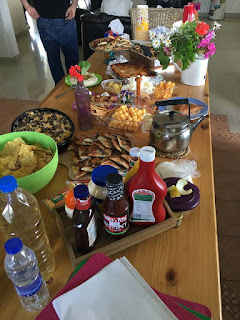 But in some other ways, the day was less reminiscent of midwest American hangouts. For instance, this was our view: And then there was the desert. Knefe!!!! One of the most delicious, and nearly endemic, dishes to come from the Middle East: a hard-to-describe sweet cheese pastry thingabob. Ibrahim done good: 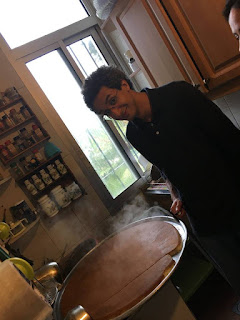 Then there were the activities. Which included a game of darts - more or less standard, even with the silly addition of balloons to aim for and pop. But also a rowdy, very Lebanese serenade of Maya, complete with hand clapping, hooting, and hollering in a style entirely unique to the Arab region. 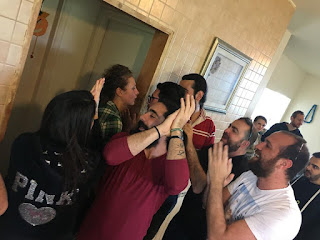 All in all, a very grand way to spend Palm Sunday. :)
Posted by Becca Farnum at 1:39 PM