As I've mentioned before, one of the very cool things about being in Lebanon is the chance to catch up with a bunch of AMENDS Fellows and see their projects for myself. Including the very cool FoodBlessed.

I snuck into a party for their volunteers last week. Yesterday, I finally earned that dinner, becoming a "Hunger Hero" by volunteering at the organisation.

Maya and her team of 'Hunger Heroes' have served nearly a quarter of a million meals, helping hundreds of thousands of people - many of whom are refugees from the Syrian and Palestinian conflicts.

Many of those meals are served hot with a smile at the soup kitchen on Thursdays, Fridays, and Saturdays. But the organisation also works via "Mouneh" Box. Mouneh refers to a style of Lebanese food preservation. FoodBlessed's mouneh boxes are large kits of non-perishable food items given to those in need.

Yesterday, I and a host of volunteers - including a great group of Lebanese Girl Guides I was able ot chat about Scouts with! - stuffed something like 150 boxes with many kilos of rice, beans, canned veggies, pasta, and other delicious and nutritious essentials.

It turns out that Easter Monday is a public holiday in Lebanon. What better way to spend it than having a jolly time with cool people?

And, as a not-quite-non-sequiter, I have now obtained photographic evidence of my dad-joke-worthy "Hosanna in the Fryest" claim from Palm Sunday:

I spent this afternoon helping out and having fun at a potluck for Maya Terro's amazing FoodBlessed Hunger Heroes. The bulk of that time was in the kitchen staffing the potato oil.
On this Palm Sunday, I say to you: "Hosanna! Hosanna in the fryest!!!" 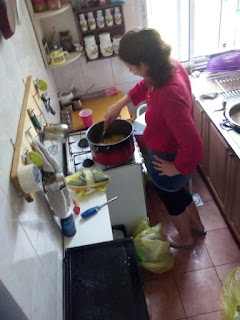