Happy Mother's Day! As it is in Britain. But not America. Just to really confuse us all.

International Women's Day is Tuesday 8 March - everywhere around the world, so there.

To commemorate the day, a group in Lebanon held a large event Friday night interrogating "The Role of Women in Peacebuilding". The Canadian, Dutch, and Indian ambassadors to Lebanon spoke, as did a Lebanese princess and the country's few female politicians.

Vanessa, the Founder and President of the Media Association for Peace (my Lebanese research partner), and I went along. It was a good evening, and a fascinating one - after the speeches it turned into an awards show of sorts, as they recognised a variety of Lebanese women for their leadership in multiple sectors with much pomp and circumstance.

By far my favourite part of the evening was the Indian Ambassador's remarks. She stood up and immediately announced that she disagreed with the entire evening's theme. To speak of the particular "role" of women in peacebuilding, she argued, was to continue drawing lines and further gender-based stereotypes. Rather than a role for women, true peacebuilding must embrace all humans in action. Instead of seeking a role for women in peacebuilding, we must seek to ensure everyone has equal roles in the basic process of life. Suffice it to say, she was right up my alley.

The event concluded with a cocktail party...at which I tragically did not find the Indian Ambassador.

Vanessa and I grabbed dinner with a friend of hers and I made it home a bit after midnight, in order to get up early on the Saturday and head to a conference on the garbage crisis in Lebanon. The event was in Arabic, and thus quite a bit of work for my brain, which has definitely not caught on to Lebanese Arabic fluently! But I did fairly well and learned a lot.

Best of all? As I left the UNESCO Palace, who should I spy in her car than the Indian Ambassador, on her way in for another event?! I very cheekily interrupted her break to thank her for her remarks. She was incredibly gracious and chatted with me for quite a while about my work in Lebanon. She may even come to the conference MAP is hosting on Media, Peace, and the Environment! 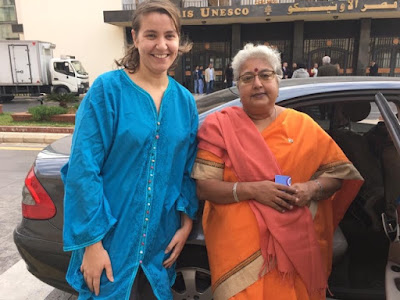 And to all of you - Happy Mother's Day. Be you a mother or not, female or not, anything or not. May you cherish the maternal influences in your life and give love to others, in whatever way you are capable and whichever form they need. :)