Warning: This is unlikely to be all that interesting to any of you. ;)

Key Findings
·      “Water for food” is not necessarily synonymous with “water for food security”
·      Countries with similar geological conditions face very different geopolitical realities; national water policies and agricultural motivations reflect this
·      Water policies and research should seek to understand “water for food” and its connections with economics, the environment, and securities more broadly

Purpose of and Motivation for Brief
Agriculture accounts for 70% of the world’s “blue” freshwater use. Understanding how and why this amount of water is allocated for agricultural production is critical in properly managing water resources.
This policy brief will examine how water for food is understood and utilised in national water policies. Using comparative analysis with Egyptian and Israeli case studies, the brief will explore how different geopolitical realities can create drastically different motivations for agricultural water allotments.
Egypt and Israel were selected as case studies for geopolitical considerations. Both are arid or semi-arid, yet devote a great proportion of national water resources to agriculture. Each is a downstream riparian but also a regional hegemon. However, the states have drastically different national cultures and priorities. Israel’s status as a regional “outcast” in many ways and the recent political turbulence in Egypt – motivated partially by food issues – make the countries particularly interesting for study.

The Web of Water Security
Connections between water, food, energy, and climate are increasingly highlighted in academic research and policymaking. A number of nexuses have arisen in discourses surrounding these issues, the most popular of which is the “Water-Energy-Food Nexus”, a concept taken up by numerous think tanks, environmental organisations, international bodies, and governments. More recently, Mark Zeitoun has suggested a “Global Web of National Water Security”, a conceptual tool meant to draw attention to the strong but often unrecognized links between biophysical and social processes surrounding water resources. Zeitoun’s web places “water security” at the centre with six connected spokes: national security, water resources security, food security, energy security, climate security, and human/community security. 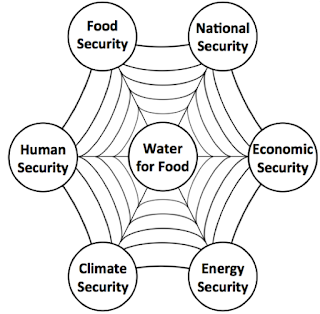 Egyptian and Israeli National Water Policies
Current Egyptian policies are muddled by government instability; research reflecting on previous policies may thus be particularly relevant in informing possible future steps. This brief is based on the 2005 “Integrated Water Resources Management Plan” and “Water for the Future: National Water Resources Plan 2017”, the latter of which was supported by the Dutch Government. Stated major concerns are water for people; water for food production; water for industry, services, and employment; developing a strong institutional framework; quality, supply, and demand management; protection and restoration of vital ecosystems; and cooperation with Nile Basin countries.
The State of Israel has a nationalised water sector. This brief is based on the 2002 “Transitional Master Plan for Water Sector Development in the Period 2002-2010” and 2011 “Long-Term Master Plan for the National Water Sector”, which focus on action in uncertain conditions; system management; consumption management; water and agriculture; urban water systems; improving institutional-organisational structures; quantities and qualities of water; minimising harm to ecological system services; and balancing economic, social, environmental considerations.

Water for Food in Egypt and Israel
For both countries, increasing populations and rising demands are the major concern in national water policies. However, both Egypt and Israel heavily prioritise agricultural development and work to ensure adequate water resources for the sectors. In Egypt, agriculture accounts “for about 95% of the total net demand” (IWRM 20). Israel’s “Long-Term Plan” explicitly states that, once the water sector has stabilised, “the amount of water for agriculture will not be limited and will fully match the needs of the sector’s development” (44). But even though both states have a strong emphasis on water for food, the two states’ motivations for allocating water to their agricultural sectors vary.
The word clouds above highlight the most commonly used words in Egyptian and Israeli National Water Policies, illustrating the two states’ different approaches to and priorities in water management. “Agriculture” and “nature” both appear in Israel’s; “land” and “agricultural” are relevant keywords for Egypt. “Food”, however, is not one of the most common words. The possible disconnect between agriculture and food in national water policies can be explored through the “Water for Food Web”.

Water for Food…
…for National Security
Egyptian national security has recently been rather shaken by protest and the overthrow of President Hosni Mubarak. National unrest in the past decade has been motivated partially by global food price spikes over grain, a staple of the Cairene diet. The Egyptian government has since prioritised food self-sufficiency to protect national security against global shocks and has made multiple statements on the need to expand agriculture through irrigation.
Israeli policy documents regularly call agricultural development a “national objective”. “Making the desert bloom” was central to Zionist policy. Agricultural success was seen as a way to legitimise the Jewish claim to the land. The state continues to employ its technical expertise in irrigation and water efficiency technologies for diplomatic relations. In this way, water for food has been water for nation building more than water for food itself.

…for Economic Security
Egypt’s IWRM Plan recognises that agriculture is a “major economic activity in Egypt”, accounting for nearly 15% of its GDP. Egypt has been more susceptible than most countries to food price shocks; internal food production is thus partially a mechanism for ensuring economic resilience.
Israeli agricultural produce is marketed throughout Europe and is one of the country’s links to countries, something sorely needed for a country that is not recognised by many of its neighbours. Israeli policies of agricultural water pricing promote economic sustainability for the sector.

…for Energy Security
Egyptian national water policies say virtually nothing about the link between water for food and energy. For Israel, energy is one of the few issues present in this web that does not come under the direct control of the National Water Authority. A great deal of energy is used in water for food: Drip irrigation and other agricultural technologies are energy-intensive.

…for Climate Security
In Egypt, food industries are one of the major contributors to water pollution. Water for food is thus considered by the state as a climate security issue primarily through the lens of environmental sustainability concerns, and the link between water for food and climate security is a negative one.
In Israel, the bulk of the water used in agriculture is marginal water from brackish sources. Israeli policy documents also speak of the need for water to help preserve the land’s fertility. For this country, then, the water for food-climate link is a more positive one.

…for Human Security
Egyptian water policies consider rising populations and improved standards of living, indicating that water for food is considered, at least partially, an issue of human security. Policy documents also speak of the desire to improve farmers’ incomes, raising another consideration in water for food.
Israeli documents discuss the need to care for rural communities. Population growth, primarily from immigration influxes, is heavily considered.

…for Food Security
Egyptian water policy documents explicitly mention “food security” as often as they do “water security”; indeed, food security is listed as the first challenge “facing the Government of Egypt as pertaining to water resources management” (IWRM 19). Food security is also stated explicitly in Israeli documents as a major policy motivation, but the state is richer and thus more able to depend on food imports if needed.
The links between water for food and food security are obvious in many ways, but consideration is needed of the myriad number of ways states employ “food security”.  Food security for whom and to which ends?

Conclusions and Recommendations
•       Agricultural water can contribute a more than food to a state’s national security
•       States facing different geopolitical conditions may have different motivations that lead to similar policy actions (e.g., Egypt and Israel both prioritise water for their agricultural sector but for different reasons)
•       The new Egyptian government must balance an increasing population’s freshwater needs with agricultural demand and a desire for food self-sufficiency
•       The Israeli government must better consider the costs of energy used in agriculture as well as water allocations
•       Policymakers should understand and act on the ways agriculture and food production impact other sectors
•       Researchers must consider the nuances of states’ motivations in agricultural water allotments